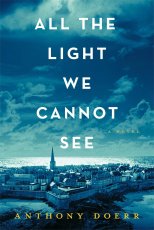 All the Light We Cannot See

Marie-Laure LeBlanc lives in Paris with her father, who works for the Museum of Natural History as the lock master.  At age six, she becomes completely blind, and her father trains her to navigate her own way through the city.  When the Nazis occupy Paris, twelve-year-old Marie-Laure and her father flee to Saint-Malo, where they live with Marie-Laure’s great-uncle.  With them they carry what may be the museum’s most coveted jewel.

At the same time that Mari-Laure learns how to cope with her new disability, Werner Pfennig grows up with his younger sister in an orphanage in Germany.  When his talent in fixing and building radios becomes noticed, he earns a place in an academy for Hitler Youth, where he hones the skills required for his first mission.  As he tracks down the resistance, he becomes gradually more aware of the cost of his service to the Germans.  His journey takes him to Saint-Malo, where his story and Marie-Laure’s intersect.

Doerr’s choice of characters allowed him to present the war to the reader in a unique way.  Werner’s perceptions of the war are shaped by his sight, and the reader sees the war through his eyes.  As often happens with a person missing one sense, the other four senses grow sharper in an attempt to compensate for what was lost.  Through Marie-Laure the reader can appreciate the sounds, smells, and even tastes and physical feel of war.  Using these two characters, Doerr was able to craft a multi-faceted view of World War II.

In addition to the sensational approach, Doerr paints colorful images using metaphors and similes.  I find that these literary techniques often contribute to creating a more vivid picture of the story, and I always enjoy their use.  The author also chose to write in present tense.  While I am still not a big fan of it, I have recently become more receptive to this style.  However, this would be something to consider for anyone who prefers otherwise.

Marie-Laure’s and Werner’s stories illuminate the stark contrast between the lives of those on opposing sides of a war.  Marie-Laure is a girl who grows up in Paris only to be harshly uprooted and whisked away to a different city because of the Nazi occupation.  Werner is raised to believe that the most important thing as a citizen of Germany is absolute, unwavering loyalty to his country.  He becomes a private in service to the aggressor that drove Marie-Laure from her home.  Yet despite their vastly different upbringings, they both share at least one thing in common.  Doerr drives home the point that the young, no matter whom they pledge their allegiance to, are changed quickly and brutally by war, forced to mature far beyond their years.

I would recommend this book to older readers.  It describes the brutalities of war and death in a way that could be disturbing to less mature readers.  There are a few cases where profanity is used and one incident of rape towards the end of the book.  All the Light We Cannot See offers thoughtful insight into two completely different perspectives of the Second World War, and it would make a good addition to your reading list.

← The Day of the Jackal
The Great Alone →

2 comments for “All the Light We Cannot See”