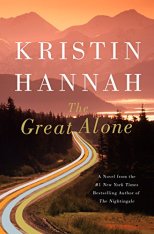 When Ernt Allbright, Leni’s father, comes home from the Vietnam War as a former POW, he is barely recognizable as the man he once was.  In 1974, he makes an impulsive decision to move his family to Alaska, where they will harvest their own crops and hunt their own meat.  Thirteen-year-old Leni hopes for a fresh start, and at first, it appears that her father has finally found his cure in the rugged beauty of Alaska.  But as winter approaches, he gradually deteriorates and becomes increasingly unstable.  Soon, Leni realizes that the dangers within their own cabin are far greater than those of the wilderness outside.  Even the local help available just minutes away may be too far to save them.

Although I enjoyed The Great Alone, I found the author’s writing style to be a bit simplistic – simple vocabulary and simple sentence structure.  As with The Nightingale, also by Kristin Hannah, it almost seems as if she wrote this book for younger readers, making it an easy read.  This may be due in part to the fact that she did not include the small details that an older person would notice when interacting with others, such as subtle body language or slight changes of tone and facial expression.  In addition, much of the dialogue seemed to be structured in a more juvenile way, and the points being made were made obviously.  This style was well-suited for the first part of the story, when Leni was only thirteen and saw things through a child’s eyes.  However, as Leni grew older, her perceptions didn’t quite mature to the level that would be expected, and I would have enjoyed the book more if they had.

Some of the themes Hannah explores are love, hate, and the incredible resilience of the characters.  There is the crazed, untempered love between Ernt and Cora; the caring, supporting love between Cora and Leni; and the desperate love between Leni and Matthew, a boy from Alaska, that is frighteningly reminiscent of that between Ernt and Cora.  Leni grows to hate her father, but much of this hatred is fueled by her love for her mother, who is brutally abused by Ernt.  Throughout all this, Leni and Cora must learn to hold each other up and bounce back from each attack on their fraying resolve.

Despite my preference for a more complex writing style, the content is mature, and I would recommend this book for older readers.  There is a great deal of profanity and strong language, as well as some violence.  Several intimate scenes take place, most without much detail, but there is one more explicit scene in chapter nineteen.  For those of you simply looking for a satisfying story to finish in one night, this could certainly be it.  However, while I did appreciate The Great Alone as a quick and easy read, I would have preferred to read a book that left me thinking about it for days.

← All the Light We Cannot See
Still Alice →