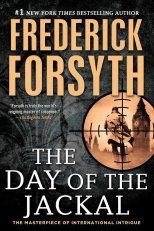 The Day of the Jackal

Colonel Marc Rodin is the new operations chief of the OAS, an organization with a current primary goal of eliminating the president of France, Charles de Gaulle.  Rodin can no longer trust the OAS, which has become heavily infiltrated with spies.  Instead, he turns to the Jackal, a cold and calculating assassin possessing unparalleled skill in his art.  By a queer twist of fate, the authorities discover the plot.  Knowing almost nothing, they assign this case to their best detective, Claude Lebel, in the hopes of stopping the Jackal before he completes his mission.

Part of this book was written from the perspective of those positioned against the president, and the other part was written from the point of view of those working to stop the Jackal.  I liked this approach, as it allows the reader to understand both sides.  Because I already knew how the Jackal was preparing for his work, I could also appreciate Lebel’s intellect and the difficulties of detective work.

I think Forsyth created the perfect kind of assassin – mysterious, cold, and without equal.  Usually the assassins in stories are mentioned only from the “good guys’” point of view.  In this book, however, Forsyth spends time on the Jackal, describing his preparations in detail.  I have not read any books written with this technique, and although the reader does not know the full extent of the Jackal’s plans until later, I think this detailing effectively adds another layer to the story.

This is not your typical action-packed thriller.  The story is perhaps slowed down by the inclusion of so many details, such as the different positions of various people working for governments around the world, although the details also lend much credibility to the story.  This level of attention to details is partly attributable to Forsyth’s clean and crisp writing style.  The author has a way of writing that makes every action performed by the characters seem calculated and deliberate.  While I like this style to some extent, I think Forsyth could have reserved its use for certain characters, such as the Jackal, for whom precision is of the utmost importance.  This would have given more variety to the story and also caused certain characters to stand out and be more memorable.

I would recommend this book for older readers.  Throughout the whole book, there are about two profanities used.  Otherwise, the language is pretty clean.  In chapter eight, there is a torture scene that could be disturbing for younger readers.  In addition, there are a number of intimate scenes of varying inappropriateness and several detailed – but not gorey – killings.  The Day of the Jackal is not the exciting thriller for leisure reading because of the amount of information given.  However, as the author notes, he seeks for his books to be “interesting, accurate, and feasible”, and I believe he has accomplished all three.  I can see how many people would enjoy reading a realistic story crafted by an author who has had actual experience in the field as a foreign and war correspondent, as long as they are not overwhelmed by the abundance of details.

← The Kite Runner
All the Light We Cannot See →