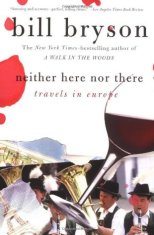 Neither Here nor There

In 1972, Bill Bryson traveled across Europe with his notorious friend from A Walk in the Woods, Stephen Katz.  Twenty years later, he decided to retrace his steps, stopping by Paris, Rome, Vienna, and many other cities.  The result of this second trip is chronicled in Neither Here nor There.

What I enjoy most about Bryson’s books is his outrageously funny writing style.  He always manages to look at events from a perspective that makes them seem humorous.  Where most people would see nothing to smile at, Bryson rearranges the details to paint a picture that leaves the reader laughing helplessly.  He illustrates his points very colorfully and with great creativity – sometimes so colorfully that his descriptions are almost painful to read.

While Bryson did offer an interesting tour of each city, it seems that he had more to complain about than he had to appreciate.   At each stop, he bemoaned the difficulty of finding a hotel room and when he explored the city, he frequently expressed his disappointment with the sights.  While it may be true that it was exceedingly difficult to find a place to stay and that these Europeans cities were somewhat less than he had expected, it appeared as if Bryson was focusing solely on the negative aspects of his trip, with the occasional complement.  I would have liked to see a more balanced assessment of the places he visited.

In addition, Bryson spent some time detailing several adult toys being sold in various cities.  While it is fine for him to mention this fact, I thought he spent much longer than needed describing what these objects looked like and the kind of rhetoric that came with them.  He could have made his point in a fraction of the words and detail he used.

While Bryson does have a delightful writing style, he occasionally used some profanities and often made sexual references in a flippant manner, which I thought he could have mostly done without.  This detracted from what could have been a very enjoyable story.  Neither Here nor There is definitely not appropriate for young readers.  If you are interested in reading one of Bryson’s books, I would suggest you start with something other than Neither Here nor There, such as A Walk in the Woods or In a Sunburned Country, which make for very entertaining read.

← The Tattooist of Auschwitz
The Operator →