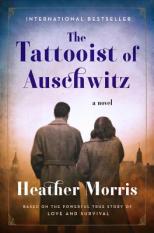 The Tattooist of Auschwitz

In April 1942, Lale Sokolov, a Slovakian Jew, is transported to the concentration camps at Auschwitz-Birkenau.  There he is made the Tätowierer, tattooing numbers on his fellow prisoners’ arms day after day.  For almost three years, he witnesses the barbaric acts of the Nazis, uses his privileged position to help other Jews, and vows to himself that he will survive.  Then one day, he meets a terrified young woman waiting in line to have her arm tattooed.  In that moment, he swears that when he makes it out of the camp, he will marry her.  It is this vow that keeps him going everyday as he witnesses the horrors and atrocities committed by the Nazis.

This book is based on a true story, relayed to the author by Lale Sokolov and his son, Gary Sokolov.  Given the importance of his job as tattooist, Lale receives extra rations and is spared from hard labor and beatings in Auschwitz.  For a while, he even sleeps in his own private room.  Such was the life of a “privileged prisoner” in a Jewish concentration camp.

While this book is an interesting story and beneficial for its historical significance, the writing style detracted from my enjoyment of the book.  Given the subject matter of the book, I was expecting somber and more complex writing.  As it was, after the first few pages, I was craving for a few more compound sentences.  The writing style made it seem as if I was reading a children’s book and even made the story seem unrealistic at times.

The Tattooist of Auschwitz was originally written as a screenplay, which may partly explain the writing style.  However, even the dialogue seemed a bit juvenile; while most of the characters were adults, their speech was like that of elementary school children.  In addition, Morris offered a simplistic view of Auschwitz that seemed to downplay the significant suffering and hardships of the prisoners and the terrible acts of the Nazis.  The image of Auschwitz she presented was a camp in which the prisoners were only a bit tired and hungry and the guards were merely cruel men who took pleasure in verbally assaulting the prisoners – hardly a justifiable portrayal.

As a Jew struggling to survive in a concentration camp, it is understandable that Lale would put his own needs first without regard to those of the other prisoners.  However, in his attempts to avoid hard labor, he risked bringing severe punishment on another prisoner already taxed emotionally by her own ordeals.  He also sent several notes to the girl he loved and asked her to respond in kind, unable to control his desire to communicate with her.  If she were to be caught with paper and pencil, the penalty for her would be death.  Instances such as these made Lale a less likeable character for me than he could have been.

Despite its simple vocabulary and sentence structure, this book would not be appropriate for younger readers.  In addition to a smattering of profanities throughout, there were also several intimate scenes that, although not explicit, were very suggestive.  While this book is an account of a remarkable true story, it was a missed opportunity for what could have been a truly riveting and meaningful book.  There are many other books on the Holocaust of both historical significance and literary value that would be a better investment of time.

← I Am David
Neither Here nor There →