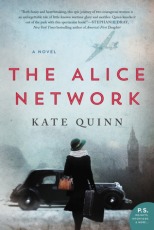 In 1947, young Charlie St. Clair, pregnant and unmarried, travels to Europe with her mother to have her “Little Problem” taken care of.  As it happens, Charlie has also come up with a plan to escape her mother and search for her cousin Rose, who disappeared during World War II.  When her chance comes, Charlie slips away and heads to London, where she hopes to find answers.

In 1915, Eve Gardiner is recruited as a spy.  She is sent to France, where she is trained by Lili, the head of a vast network of spies.  More than thirty years later, Eve spends her days in a decrepit London house, drunk and haunted by the betrayal that tore apart the Alice Network.  But when Charlie barges into her house one night with questions she cannot ignore, she is thrown into a mission to find the truth.

The story alternates every chapter between Charlie in 1947, written in first person, and Eve in 1915, written in third person.  I thought this was an excellent way to write the story.  At first the reader is left to wonder why Eve is the miserable drunk she is now, but as the author gives flashes of insight into her past life, things slowly become clearer.

This technique also plays an important role in character development.  As I already mentioned, with every chapter spent on Eve’s past, her character becomes more defined and understandable.  Each event as described by the author shapes Eve and makes her into what she is in 1947.  Charlie is less well-developed than Eve.  I think since Charlie is one of the main characters, the author could have spent a little more time fleshing her out and giving her more character and meaning.  As it is, she seems to be more of an expedient the author used to rouse Eve out of her drunken state and prompt her to seek the answers to the questions that still plague her.

I like the fact that this book is based on true historical events.  The Alice Network was a real French spy ring headed by Louise de Bettignies, a real historical figure with the code name of Alice Dubois, known as Lili to Eve.  In addition, the author also writes about a real massacre that took place in the French village called Oradour-sur-Glane.  This makes The Alice Network more interesting to read, knowing that some of the events that took place in the book took place in real life as well.

However, to me, this story could have been even more realistic.  Being a spy in a foreign country is dangerous, and the author did make that point in her book, but I thought the danger could have been more present and perhaps represented by more encounters with the enemy in which the enemy is very close to discovering Eve and she must play the innocent citizen.  Of course, this may not have fit the storyline very well, but it would have put me more on the edge of my seat if there had been more moments of tension.  Without the tension, the book was lacking in that it did not draw me deep into the story and therefore made me feel as if I was just an observer from afar.  I still enjoyed The Alice Network, but it was not the page-turner it could have been.

Quinn’s writing style is simple and easy to read, and she does not use complex vocabulary.  However, there are several very intimate scenes throughout the book as well as the use of rough language.  There is also one scene that involves torture.  I would recommend this book for more mature readers.  It takes place in a true historical setting and includes real historical events and figures, so I believe it would be a beneficial read.

← Only Killers and Thieves
Tomorrow →