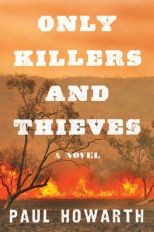 Only Killers and Thieves

In 1885, brothers Tommy and Billy McBride come home one afternoon after swimming in a remote waterhole to find a devastating tragedy.  Enraged and thirsting for revenge, they turn to sly and cunning John Sullivan, their father’s former employer and the wealthiest landowner in the region.  Sullivan forms a team lead by Inspector Edmund Noone, a ruthless and dangerous man.  The hunters’ goal: vengeance against the indigenous Australian to protect the rights of white settlers.  As they pursue their target, their gruesome experiences will have a great impact on Tommy, one that will last the rest of his life.

This book started out a bit slow for me, but this may have been because I was expecting the tragedy to happen right away.  This was a different kind of story than I was used to – rougher, dirtier, and less cultured.  Some of the characters seemed to have no moral values whatsoever, creating a rather corrupt atmosphere in the book.  This kind of style may not appeal to some people, but I enjoyed this book and would highly recommend it.

One thing that impressed me about this book was the way in which the author was able to capture Tommy’s suffering so well without using words to describe it directly.  Instead, Howarth manifested Tommy’s emotional pain through his thoughts, his body language, and his actions.  This spoke to me much more than it would have if Howarth had chosen to spell out Tommy’s feelings with words.  In addition, this technique most likely produces a more accurate and colorful depiction of a character’s mental state than anything else.

Another thing that I felt the author did very well was highlighting Tommy’s internal struggle between right and wrong.  Throughout the book, Tommy is forced to make decisions that could have a major impact on himself and others.  In most cases there is a clear line between the right decision and the wrong decision, but for Tommy it is extremely difficult because of the enormous pressure from the company he is with and the possible consequences if he makes the “wrong” choice.  What makes it even worse is that his brother Billy has already been led astray and cannot understand why Tommy is not more accepting and willing to follow the others’ lead.

As I mentioned before, I would highly recommend this book.  However, it does contain some rough language in the form of four-letter words beginning with “f”.  In addition, there was a strongly implied rape as well as some rather vivid descriptions of violence.  In the end, I would suggest this book for mature readers because of the heavy theme and potentially disturbing images.