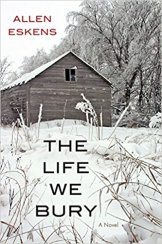 The Life We Bury

Joe Talbert is a college student tasked with a writing assignment for his English class – interview an elderly person and write a brief biography.  Joe finds Carl Iverson in a nearby nursing home, a Vietnam veteran convicted of rape and murder and dying of cancer.  As Carl relates his life’s story, Joe cannot reconcile the hero in war with the man that raped and murdered an innocent girl.  With the help of his neighbor, Lila, he works to uncover the truth.  As he digs deeper into the case, he struggles to manage his constantly drunk mother and autistic brother.  Slowly, Joe begins to uncover the hidden facts of Carl’s conviction.  But as he learns more, the danger increases.  It is up to him and Lila to find the truth before disaster strikes.

For me, this book was a page-turner, as the plot made the book very suspenseful.  Joe comes to Carl expecting simply to fulfill a homework assignment, but instead is pulled into something far darker.  Almost every chapter contained a new discovery waiting to be read, adding to the mystery.  At the end of every chapter, I couldn’t wait to start reading the next one, knowing it would contain yet another revelation – something that would either bring clarity or add to the confusion.

Joe is a character who sometimes wishes to be more than he is.  His autistic brother, Jeremy, seems to have gotten all the qualities of a good physique – greater height, wider frame, and curling golden hair.  While Joe does not resent his brother for it, he does occasionally regret his lacking in this area.  But while Jeremy may have the looks, Joe will need the brains as he plays his dangerous game.

As you can imagine, Joe has an interesting relationship with his brother and a terrible one with his mother, adding another layer of complexity to the story.  With the mind of a child, Jeremy is incapable of having a normal, mature conversation.  Joe clearly loves his brother, but Jeremy’s disability in combination with his mother’s alcoholism and unpredictable behavior makes it difficult for him to manage his own life.

The main characters were very well-developed, a must-have for mysteries.  As the story progresses, more details and past events are revealed about each character, adding to their depth and giving the reader more understanding of the characters’ actions.  Some things remain a mystery until the author chooses to uncover the facts, while others pop up suddenly, surprising the reader, but are explained almost immediately after.

Although this book is relatively easy to read with no difficult vocabulary, it does contain some rather strong language.  Most of the profanities come from Joe’s mother, who is, after all, a drunk, but a good portion of them also come from Joe himself.  The theme is very mature, as it has to do with murder and rape.  Chapter 14 contains a description of a burned corpse, while Chapter 23 details a short, but rather descriptive account of a rape and murder.  There is also a brief sexual scene at the end of chapter 39 to watch out for.  Chapters 14 and 23 leave very little to the imagination, while Chapter 39 is more vague and allows the reader to fill in most of the details.  Overall, The Life We Bury is for a more mature audience.

Although it may not have been written for this purpose, this story serves as a reminder that to judge before knowing all the facts or too readily believing others’ claims is often a fatal mistake that can lead to drastic consequences.  This is an excellent book and I would highly recommend it – as long as you think you can handle the content.

← The Boy in the Striped Pajamas
Deception Point →