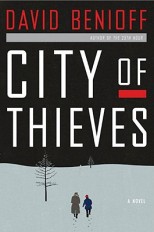 During the Nazi siege of Leningrad, Jewish Lev Beniov is arrested for looting a dead German’s body and thrown into prison, where he meets Kolya, a deserter with perfect Aryan looks.  Expecting to be executed, they are surprised to be met instead with a peculiar command from a powerful Soviet colonel – find a dozen eggs for his daughter’s wedding cake.  If they succeed, they will regain their freedom and access to rations.  And so Lev and Kolya set out to find eggs, in a city where everyone knows eggs no longer exist, in a time when it is every man for himself.

Lev and Kolya make for an amusing pair.  Lev is cautious and sometimes sullen.  Kolya is witty, confident, and seemingly without a care in the world.  This mismatch of personalities creates a chemistry between the two that is highly entertaining, although Lev clearly often finds Kolya utterly unamusing.  Benioff capitalizes on this relationship and uses it to make the book hard to put down even when the characters are doing something as mundane as walking through the woods.  This was perhaps the best aspect of the story.

I found it admirable that Benioff was able to create a quite engrossing story from such a simple starting point – finding a dozen eggs for a colonel.  It turns out finding eggs in a city under siege is far from simple, and Lev and Kolya are forced to employ a plethora of different ideas in a desperate attempt to complete their task.  The lengths to which they go to find eggs makes the whole story comical in a way, but the real content – the growing bond between Lev and Kolya – gives the story more meaning than a simple comedy.

City of Thieves contains quite a bit of material that is sexually very inappropriate, sometimes bordering on vulgar.  This takes the form not of explicit descriptions of intimacy but rather through the characters’ lustful thoughts and spoken references and jokes.  While I understand some of this may be necessary in order to demonstrate the personality of the characters and the times in which they lived, the sheer amount of it in the book detracted from my enjoyment of the story.  I thought Benioff could have portrayed his characters’ personality without so much sexual material.

Aside from this, there is a good amount of profanity as well as several bloody and possibly disturbing scenes.  Given these elements, I would recommend this book for older readers.  City of Thieves is a good story but may be difficult to read for some.  If you have a good stomach, this would be a great book to read while curled up by the fireplace on a wintry night.

← The Spy and the Traitor
The Devil in the White City →