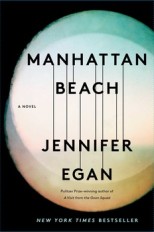 Young Anna Kerrigan travels one day with her father to meet Dexter Styles, a man her father seems very anxious to impress and who appears to play a vital role in her family’s survival.  Several years later, Anna’s father has disappeared, and Anna is working at the Brooklyn Naval Yard in an effort to contribute in some way to the war.  Eventually, she becomes the first female diver, a dangerous job that requires her to repair the ships needed to win the war.  When she meets Dexter Styles again one night, she begins to unravel the mystery of her father’s sudden disappearance and understand more of the secret life she never knew he led.

This book has a different storyline than I am used to.  It is the world of gangsters and men who walk on both sides of the law.  There is no “good” character in this story; all of them have some sort of dark stain on their lives.  As a result, none of the characters are exactly likable, and I found myself unable to root for any of them.  The author chooses not to delve too deeply into the lives of gangsters, instead giving the reader only a glimpse of the inner workings.  This allowed more focus to be put on the story itself.

The story seemed to progress a bit slowly, although this could have been because I was expecting a more fast-paced read.  There is also a good deal of character development, something I thought the author did quite well.  Little by little, each character’s past is slowly revealed, leaving the reader with a little more understanding each time.

At times, the author’s writing becomes a bit vague and abstract, illustrating events through sensations and thoughts rather than concrete descriptions.  This often left me puzzled as to what had actually happened.  Perhaps the author was trying to describe events as they seemed to the character, perceived as a whirlwind of emotions and ideas rather than solid pictures.

Although the storyline is intriguing, Manhattan Beach is definitely not appropriate for young readers.  In addition to a fair share of four-letter words, there are a good number of sexual references as well as a few intimate and explicit scenes.  Although these events were important parts of the story, I felt that the level of detail presented in the book was not necessary in order for the story to progress and would have been better to leave out.  Without these details and sexual references, I would have enjoyed the book much more.

← Salt to the Sea
Dragon Teeth →