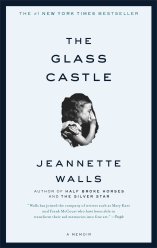 The Glass Castle is the true story of Jeanette Walls and the events that shaped her, beginning with her childhood and following her into early adulthood.  When she was a child, her family was always on the move, usually running from some sort of trouble.  They skipped from town to town, making a living however they could and often going hungry for lack of food.  Throughout all this, Jeanette and her siblings learned to be self-dependent and to make use of whatever came their way.  This book is the story of her struggle to survive and ultimately, to succeed.

The storyline follows Jeanette’s family, made up of herself, her brother, her sister, and her parents, as they move from place to place in an effort to stay alive.  Her family never considers any one place as “home,” as they never stay anywhere for long enough.  Given that they are always on the move, Jeanette has no real friends and develops close ties with her siblings.  Her father is a drunk who comes up with grand plans and excuses in an attempt to ensure that his family does not believe him to be simply squandering all their money on booze for himself.  Her mother seems to sometimes see raising children as a burden and often puts her own interests before her children’s.

Jeanette’s family has a peculiar chemistry.  Any other family with such mismatched personalities would most likely have fallen apart within a year, but this family somehow managed to remain together despite the individual differences and constant fighting.  The relationships between the family members make the story that much more interesting, causing the reader to be amazed at the resilience of the Walls family.

As Jeanette grows older, it is evident that she is becoming more independent and less naïve, qualities necessary for survival in the environment of her childhood.  She learns to care for herself and to draw support from her siblings, while at the same time providing support for them in return.  She begins to see through her father’s charm and realize how his drinking habits are affecting the family.  But despite this, she continues to love him as you would only love family.

There is occasional foul language from Jeanette’s father, appearing mostly when he fights with others, as he enjoys flinging filthy names and insults at his opponent.  The theme, while not inappropriate, may be a bit mature for younger readers and could potentially bore them.

In general, books that portray the struggles of the protagonist appeal to me.  It provides another layer to the story, in a way its own story, or rather, a sub-story of the book.  The Glass Castle actually features Jeanette Walls’ struggles as the main story – her struggles with her parents, with being able to procure enough money to buy warm clothes for the winter, with simply finding enough food to fill her stomach.  This is the main reason why I enjoyed this book and why I would recommend it to other mature readers who share my views.  Even if books that feature the main character’s struggles are not your favorite, I still believe you would be able to enjoy this book.  It is not exciting in the same way as your typical spy story, but it provides extensive insight into the life of a poor family struggling to survive on almost nothing in an unfriendly environment.

← A Thousand Nights
The Boy in the Striped Pajamas →